A FILTHY MIND LEADS TO A FILTHY BODY.

Shane Krieger was born in the victorian seaside town of Dromana, but has lived in a number of different places. He was once a mural artist in London and Edinburgh, and has worked as an illustrator for magazines in Australia and the U.S.A.
When asked about the Filthy the Bear projec, Shane has told the following story. "I was on a bus one day. Everyone was on the way home from the daily grind and looking very grey and sour. This guy got on who was dressed as a pirate. I don't know why. I suppose he was going to a party or something. Anyway the mood on the bus seemed to change immediately. People started talking and laughing. It was weird and sort of beautiful. So I thought, how nice would it be if there were more people wandering around in costumes, evoking the same response from people and brightening their day. I went to fabric store, bought some fake fur, and Filthy the Bear was born. The first time he went out, he walked the dog and it was amazing. People invited the bear into their houses for drinks, for food and one lady even pinched Filthy on the bum. The normal barriers that we place between us in society seemed to disappear. I had a ball. People were so nice and so into it. So I started wearing the suit out to do my shopping and to the library and stuff and it was always the same. People would open up to the bear and be really friendly. It was a revelation. Sure I made some mistakes and things didn't always go so well. I found out that a night time trip into Surfer's Paradise to see a band was a bad idea. While I didn't pay for anything all night and kept getting hit on by girls with strange animal fetishes, I was a target for drunk idiots. Luckily, Filthy's head makes a superb helmet. Since then Filthy has travelled to some different places. He has been to China, Indonesia, Iceland, Norway, Japan, Sri Lanka, Costa Rica, Los Angeles, Germany, the Czech Republic and Austria and has found the same warmth in people everywhere. "I remember in one town in Indonesia especially, there was a weird vibe. People stood staring at us and it felt really heavy. It was a village in the mountains and I don't think they liked tourists very much. I had Filthy in a bag and took him out. Once I was the bear the whole village came out to see us. We had a ball and everyone was super nice. Filthy ended up surrounded by about 60 kids all singing and dancing together. We played games and even the adults got involved. It was amazing and when we left, the whole town followed us to our bike and waved us goodbye. It was such a special moment."
You can watch a brief video of that Indonesian trip by pasting this link into your browser. http://www.youtube.com/watch?v=wB6yoeS3vm4
Filthy makes short travel videos of his adventures called "Have Bear Will Travel' which he posts to his Youtube channel.
So anyway if you see Filthy, come up and say hello. He is always happy to chat but can sometimes seem surly. What would be even better though, is if you get yourself a costume and just get out there and brighten things up a little. 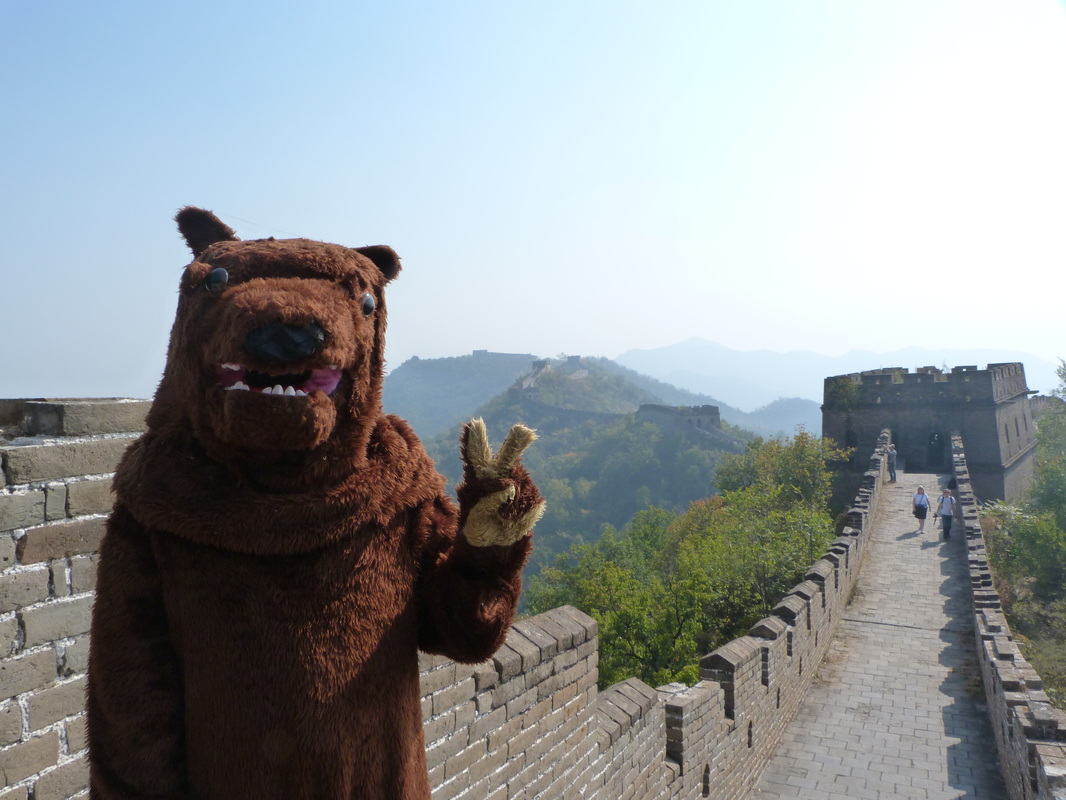